Guild workers at Digital First Media and GateHouse Media stand together against profiteering owners on World Press Freedom Day, May 3

Today, May 3, on World Press Freedom Day, WBNG stands in solidarity with all of our journalist sisters and brothers at Digital First Media and GateHouse Media, fighting profiteering owners.

Join the movement to protect journalism and demand the right to report now.

See the press release issues by Bernie Lunzer, President of the NewsGuild-CWA, below. 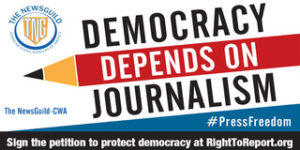 WASHINGTON, D.C. (April 28, 2017) — A broad coalition of 1,500 unionized news workers will conduct a joint day of action on May 3 — World Press Freedom Day — as part of a national campaign to protest the corporate-led assault on quality journalism.

The coordinated effort by NewsGuild members will span 29 newspapers owned by GateHouse Media and Digital First Media. It will support the fight for quality journalism at those papers and highlight the damage wrought by draconian cuts in their newsrooms and other departments.

Now, union leaders say the focus on profits threatens journalism at a critical time of politicized attacks on the news media.

“Reliable information is the foundation of our democracy,” said Bernie Lunzer, president of The NewsGuild-CWA, based in Washington, D.C. “Corporate owners have a duty to invest in the essential work done by newspaper workers and not to simply strip-mine newspapers for profits.”

The joint effort by GateHouse and Digital First Media workers marks an unprecedented NewsGuild campaign to demand that corporate owners invest in quality jobs and fair contracts after years of layoffs, furloughs, pay freezes and benefit cuts. Contract negotiations are under way or expected to resume soon at both companies, but managements have shown little interest in changing course.

Workers at GateHouse and Digital First Media have endured some of the most vicious staff reductions in the news business.

Alden Global Capital, a secretive New York hedge fund, owns DFM and has slashed staffing levels by more than twice the national average during the past five years, while pocketing millions by selling off the company’s real estate assets.

Under New Media’s business model, the company buys newspapers, strips them down to maximize cash flow, and uses that money to pay dividends, pay bonuses to corporate officers and fund more acquisitions.

The 13 Digital First bargaining units represent workers at 12 newspapers, including the Denver Post, San Jose Mercury News, St. Paul Pioneer Press, and suburban publications in the Bay Area, Philadelphia, and Detroit markets. Last week, DFM announced that it would lay off more than 20 percent of the Guild-covered newsroom staff at the East Bay Times, just one week after it was awarded journalism’s highest honor, the Pulitzer Prize, for breaking news coverage of the deadly “Ghost Ship” warehouse fire in December.

In the new campaign, the Guild is pushing back nationwide before media profiteers cause further wreckage to the communities they are supposed to serve.

The May 3 World Press Freedom Day action will include the display of pro-journalism literature at desks and other work stations, and appeals for public support in local communities and online. The theme: “Democracy Depends on Journalism” and “Invest in Us.”

The action will mark the first coordinated effort by news workers at the two companies to demonstrate solidarity in the workplace and remind the public that quality journalism matters.

NewsGuild members are reaching out to allies, including journalists working for other employers – both union and non-union – as well as community advocates concerned about the corporate gutting of newsrooms across the United States.